Life after the College of Nursing at Nova Southeastern University can be full of surprises. Find out which NSU alumni are shining with professional integrity and achievement as nurses of the highest caliber. 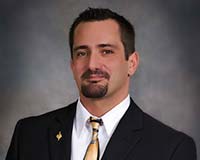 Since graduating from the Entry-Level Nursing Program in 2008, Fabien R. Pampaloni has attained a high degree of success and excellence that exemplifies a wonderful role model our students and community can embrace and value.

Upon graduation, Pampaloni began his nursing career at Broward General Medical Center, where he worked the nightshift on the Pediatric Intensive Care Unit (PICU). Unfortunately, a year after he was hired, he received notice from the United States government that he would need to return to his native country of Switzerland due to the declining national economy in the United States.

Despite the overwhelming support he received from his PICU team, Pampaloni was invested in maintaining a respectable reputation. He complied with the government directive and voluntarily returned to his home for several months. Because of the tremendous amount of time and money he had invested in his nursing career, he proactively contacted 50 individuals working in health care to seek assistance in returning to the United States.

In 2010, Linda Wilson, Ph.D., R.N., from Drexel University in Philadelphia, Pennsylvania, asked Pampaloni to serve as a technology research assistant in its new simulation center, which allowed him to return to this country. Despite the challenges this opportunity presented, he succeeded in this role. In fact, he learned to successfully write grants that funded three projects, manage a simulation center, educate standardized patients, and promote patient safety.

In 2010, Pampaloni published his inaugural article, which was followed by the publication of four chapters in a text entitled Human Simulation for Nursing and Health Professions in 2012. He also created several Web sites and served as Webmaster for the New Jersey/Bermuda PeriAnesthesia Nurses Association for three years. In addition to these accomplishments, Pampaloni has been invited to present numerous presentations as well as conduct several workshops on simulation all over the country. He also served as treasurer for Sigma Theta Tau International in Philadelphia.

In 2011, he was approached to work for Pocket Nurse Enterprises because the organization was interested in opening its international branch and needed a multilingual person with a background in nursing and simulation. Fortunately for Pampaloni, he is fluent in English, Italian, and French and can converse in Spanish and German.

Pampaloni clearly exhibits our core values, has made an outstanding contribution to the profession of nursing, and has demonstrated great pride in his alma mater. 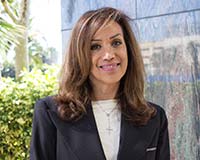 Peugeot graduated from the College of Nursing’s R.N. to B.S.N. program in 2012 with highest honors and is presently in the NSUCON nonclinical master’s program completing her M.S.N. degree with a concentration in nursing education. She is committed to being a role model for lifelong learning and mentoring others and says her long-term goal is to teach in academia. “My R.N. to B.S.N. courses gave me the foundation and knowledge to think critically, be a change agent, and see the big picture of health care today,” she explained. “Health care is a business, and nurses are truly partners in all aspects of health care today.”

During the time she was in the R.N. to B.S.N. program, she was a telehealth manager overseeing the after-hours operations for nine programs. Prior to her R.N. to B.S.N. graduation, she accepted the opportunity to transition to a clinical nurse educator in hospice and palliative care.

Peugeot is truly changing lives and changing the world through her outstanding service to the community and her extraordinary dedication to the nursing profession. Her goal is to build collaborative relationships and bring a positive influence of the hospice philosophy to stakeholders in the community.

She currently serves on the R.N.-B.S.N. Broward College Scholarship Committee, the Broward College R.N.-B.S.N. End-of-Life course Program Advisory Committee, and is a certified End-of-Life Nursing Education Consortium (ELNEC) Train the Trainer. She also serves her community by volunteering with the American Heart Association, the American Cancer Society, and the Alzheimer’s Association Southeast Chapter. Her professional affiliations include the National Hospice and Palliative Care Organization, the Florida Nurses Association, Sigma Theta Tau, and the American Nurses Association. 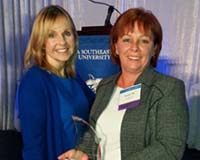 Forgione, who graduated from the R.N. to B.S.N. program in 2008, exemplifies the core values of innovation, creativity, and student-centered education—a fact that was evidenced in 2013 when she received the prestigious College of Nursing Distinguished Alumni Award.

For example, she was a key leader in the development and implementation of the nursing Dedicated Education Unit (DEU) partnership between NSU and the Lee Memorial Hospital System (LMHS). This initiative began in 2010 based on the need to improve clinical nursing education for baccalaureate students and to provide a more consistent practice environment for nursing students that integrated the mission and values of both NSU and the LMHS.

Forgione completed extensive research related to this new model of student education that provided the basis of the DEU’s development. This initiative serves as an excellent example of her commitment to the nursing profession, the community, and nursing education. Since its inception, the DEU has helped improve quality care for patients—resulting in improved patient satisfaction scores—and has provided positive feedback from students, faculty members, and staff nurses.

She is currently enrolled as a second-year student in the CON Master of Science in Nursing program pursuing a concentration in health systems leadership. “One of the most important things I learned as a B.S.N. student was how all the puzzle pieces fit together and understanding the reasoning and evidence that support what we do as nurses every day,” she said.

Forgione believes that today’s nurses are the drivers and leaders at all levels of health care change and that knowledge related to business, cost, and legislative changes is imperative for every patient-care decision a nurse makes. She also expressed the importance of working together for a common purpose and the need to have an underlying passion for everything we do. Her concluding message? “Do the right thing for the right reason for the good of the patient and you can never go wrong.” 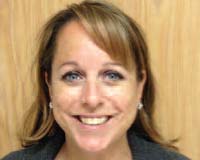 Sonia Reisdorf, M.S.N., a 2014 graduate of the college’s Master of Nursing Education program and recent recipient of the 2014 Chancellor’s Award for Community Involvement, has spent the past two-plus years working at a critical access hospital located in Kotzebue, Alaska, located 30 miles north of the Arctic Circle.

This Alaskan Hospital provides care to a population of 8,000, which includes the town of Kotzebue (population: 3,000) and 11 outlying villages with approximately 5,000 residents primarily comprised of Alaskan Native Americans. According to Reisdorf, there is no road system and the area is only accessible by plane, with the nearest hospital located 546 miles away in Anchorage. Not surprisingly, the location and remoteness of this area presents many challenges for individuals seeking access to health care, including providing health care that is culturally competent.

Reisdorf has worked hard to help improve the health of local citizens by embracing the culture through active community involvement in health fairs that promote healthy lifestyles. As this area is only accessible by plane and only has one grocery store, fresh fruits and vegetables generally are not available. Therefore, classes in food preparation using dried vegetables have been incorporated during the health fairs to teach the community how to seek alternatives when fresh options are not available. Similarly, because exercise is just as important as nutrition, Reisdorf teaches a Zumba fitness class once a week at the local high school that has been so well received that classes are now being offered in several outlying villages.

Reisdorf explained that recruiting and retaining staff is a major challenge because many of the medical providers, nurse practitioners, physician assistants, and nurses only stay for a short time as the extreme environment leads to a high turnover rate. Reisdorf, however, is committed to serving and encouraging others to improve the health of the community. As a result, she is actively involved with nursing students through the University of Alaska Anchorage in supervising clinicals and classroom sessions for the distance R.N. program. She has also functioned as the agency coordinator for the University of Washington’s medical-surgical review and certification course to ensure the professional development of the nurses in her area. “I believe it is imperative to promote nursing and to give back to the nursing profession,” she stated. “I hope to teach one day, and to share the knowledge and experiences I have encountered with future nursing students. My future plans are to finish a doctorate in nursing, and for now, continue to work and live in this remote area of Alaska.”

Return to top of page